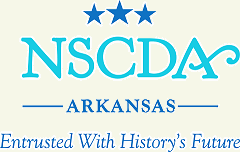 On January 26, 1898, fourteen ladies met in Little Rock to form the Arkansas Society. They followed the objectives of the National Society and concentrated on historical preservation, education, and relief work.


Because the Spanish-American War began the year the Arkansas Society was formed, the ladies' first act was the contribution of money to the hospital ship, Solace. The relief work was followed by similar efforts in two World Wars, the Vietnam War and in such natural disasters as floods and tornadoes.


Interest in the live issues of the day and the collection of artifacts and data of Arkansas' past have proceeded simultaneously. The Society copied the court records from the Arkansas Post settlement (1797-1817) and transcribed tombstone inscriptions, including inscriptions about relatives of the deceased.


At the state capitol, the Society installed a bronze tablet celebrating Hernando DeSoto's exploration and a sundial in memory of George Washington. At Helena, Arkansas, it erected an Italian marble monument commemorating the first Christian service held west of the Mississippi, ordered by DeSoto in 1541. In 1913, the Society contributed a large silver bowl to the silver service given to the battleship USS Arkansas. The bowl is now part of the collection at the Governor's Mansion.


Since the 1950s, the Society has been involved in welcoming and honoring new citizens during naturalization ceremonies, originally by taking individual Polaroid photos and serving a light lunch, and more recently with the gift of a flag pin and refreshments. The Society has also supported our troops during wartime through timely projects and by donations to the United Service Organization (USO).


The Arkansas Society has joined with The National Society in raising funds for projects such as the Arlington Memorial, the Plymouth Rock Peristyle, Sulgrave Manor, Gunston Hall, and the NSCDA headquarters at Dumbarton House, in the Georgetown area of Washington D.C.. In Arkansas the Society has supported and helped to preserve the Brownlee-Noland House at the Historic Arkansas Museum.


In April 1981, and again in April 2003, the Arkansas Dames welcomed the delegates from the eleven Region III state societies to the regional conference held in Little Rock. In 1986, in honor of the sesquicentennial of the state of Arkansas, the Arkansas Society made a gift of $10,000 to the Old State House for its historic exhibits fund and donated money to a Summer History Institute  for teachers. The Summer History Institute was sponsored by the Arkansas Endowment for the Humanities with matching funds by The National Endowment for the Humanities (NEH).


A paper doll coloring book project, underwritten by a grant, was completed in 1990. Arkansas' First Ladies Gowns Paper Doll Coloring Book contained historical information about each governor's administration. The coloring book was sold at museum shops for a number of years, but is no longer in print.


Our Society raised $25,000 as our gift to the National Centennial Project at Dumbarton House in 1991. This exceeded the original goal and included contributions from almost 100% of our membership.


In 1998, the Arkansas Society celebrated its 100th anniversary with several gala events attended by the president of the national society. Our gift to the state of Arkansas was a $15,000 endowment to the Historic Arkansas Museum for the support of the Brownlee House and its programs. The Centennial History; 1898-1998 was compiled to mark this important anniversary of the Arkansas Society.


In the first year of participation in the Congressional Seminar Project Essay Contest for high school students in 1999, our Society had a national winner. Since 2004, the Society has awarded its own scholarship to an Arkansas student to attend the Summer Institute in Washington, D.C. on the workings of Congress.


The Society has been honored to have two of its members serve as officers of the National Society: Mrs. James R. C. Cobb (Stuart) as National President (2004-2008) and Mrs. Walter G. Riddick, Jr. (Joanne) as National Recording Secretary (2002-2008). A brief history of the Arkansas Society, written by Betsy Harris, the previous president  of our Society, is available online at the Encyclopedia of Arkansas History and Culture.

OUR SALUTE TO THE FLAG

To the glory of God: and in grateful remembrance of those, our ancestors, who through evil report and loss of fortune, through suffering and death, maintained stout hearts, and laid the foundations of our country, we, The National Society of The Colonial Dames of America, pledge our loyal and affectionate allegiance to the flag.

THE NSCDA PRAYER
Almighty God, our Heavenly Father, who has brought us together in shared responsibility, we ask Thy blessing on this gathering and on our National Society.
Guide us, we pray, by Thy power given us in our Society, to preserve our native land from the works of darkness, and as wise and grateful guardians, to be in all things faithful to our heritage.
We thank Thee for the example of those who have made the distant heavens a home for us. We ask Thy blessing on our Society, that by the armor of faith and the shield of good resolution we may continue a strong citadel of virtue and love, through Jesus Christ, our Lord. Amen.
Home
Subscribe to: Posts (Atom)

Great Seal of the State of Arkansas